Princess Basma calls for unity in fight against sexual harassment 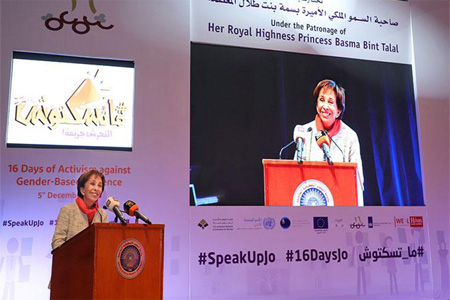 AMMAN — HRH Princess Basma on Wednesday said that it was everyone’s moral responsibility to help eradicate sexual harassment from society.

“Such abuse carries with it profound physical and psychological harm for girls and women,” Princess Basma told students of the Applied Science Private University, where an event was held for the conclusion of the international 16 Days of Activism Against Gender-Based Violence Campaign.

The event, which was organised by the Jordanian National Commission for Women (JNCW), was also attended by representatives from the government and civil society organisations, activists, officials and diplomats.

Harassment, whether in streets, neighbourhoods or on public transportation, is not limited to strangers, Princess Basma said, according to a statement sent from her office.

“The painful reality, according to studies, is that 70 per cent of aggressors are known to their victims, and are often family members. These morally corrupt individuals await any chance to commit this deplorable behaviour,” the Princess stressed.

Princess Basma added that people should work together to break down the barrier of silence and stand with victims of sexual harassment, because in all its forms, abuse makes no distinction among victims regardless of their age.

“As a society, and as individuals, men and women alike, we are required to uphold the principles of courage, solidarity and morality. We must seek to address all matters that limit our country’s progress, especially violence,” she told the gathering.

JNCW Secretary General Salma Nims highlighted a recent study conducted on sexual harassment in Jordan, which revealed that 75.9 per cent of individuals in Jordan were subjected to some form of violence in their lives.

“We should not be quiet about this silent phenomenon in our society. We should all unite as one family to fight this problem in our society, which is targeting the vulnerable,” Nims said.

During the two-hour long ceremony, organisers also remembered the late Jordanian feminist and activist Rula Quawas, whom they said played a major role in addressing sensitive and daring topics in Jordan, including raising awareness on the issue of sexual harassment.

Quawas, who passed away in July 2017, was an associate professor of American Literature and Feminist Theory and founder of the Women’s Studies Centre at the University of Jordan, as well as founder of the Knowledge Production Unit at the JNCW.

At the end of the event, Princess Basma distributed awards for the first three winners, all male students, who had drawn pictures reflecting the problem of sexual harassment in Jordan. Five local universities competed in the contest initiated by the JNCW to mark this year’s 16-day campaign activities.

The JNCW has been actively engaged in commemorating the campaign since 2007, which takes place annually from November 25 to December 10 to raise awareness on gender-based violence.

Other launch partners included the JNCW Shamaa Network, in collaboration with UN agencies in Jordan, the delegation of the EU to Jordan, as well as the Women’s Economic Linkages and Employment Development Project, funded by Global Affairs Canada and Hivos in Jordan.

The campaign consisted of around 300 activities, including the distribution of awareness-raising material tailored to local communities, radio and TV spots with key messages, live testimonies through social media networks, dozens of workshops and billboards.