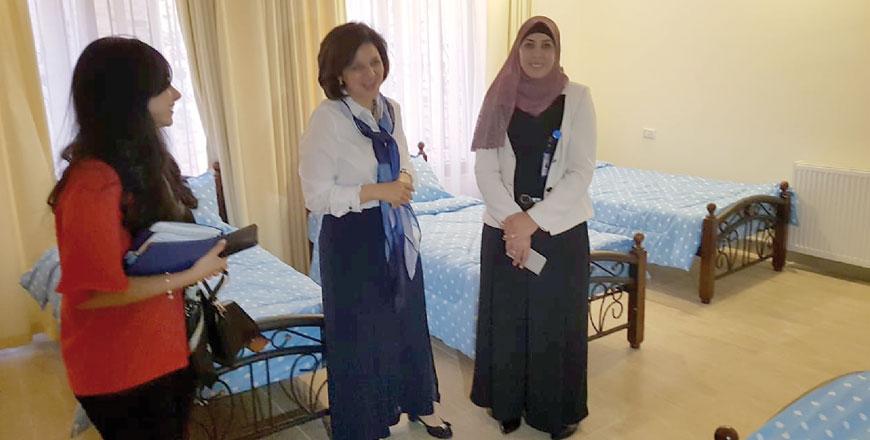 AMMAN — Minister of Social Development (MoSD) Hala Lattouf on Monday said that among the country’s top priorities is to ensure the safety and security of abused women in Jordan.

Lattouf’s remarks were made during the official opening of the state-of-the-art guesthouse “Amneh House” [‘safe’ in Arabic], also called the “Guest and Rehabilitation House for Women” whose lives are threatened in relation to so-called family honour violence.

“This is an important day for Jordan because human rights and the dignity of women have always been our priority, and we decided to open this house because we believe it is the right thing to do,” Lattouf, who inaugurated the facility on behalf of Prime Minister Omar Razzaz, told diplomats and representatives of local and international organisations and various government agencies.

Lattouf added that the “protection of women is something basic in our culture, and His Majesty King Abdullah has instructed everyone in the government to ensure that Jordanian women’s dignity and security are preserved and protected”.

She added that there are currently 29 women who are at the Jweideh Correctional and Rehabilitation Centre (JCRC) who will be “moved gradually to the guesthouse starting next week”.

“Imprisonment of women to protect them from their families has become something of the past in Jordan. Any new cases will be sent to the guesthouse by the relevant authorities and not to the JCRC. This is their new temporary home until their cases are solved in the appropriate manner,” Lattouf stressed.

Hundreds of women have been imprisoned in the past at the JCRC for indefinite periods, and without any charges, in what is termed “protective custody”, including some for periods that exceeded 10 years, during which they cannot leave the facility without the administrative governor’s permission or if a male guardian signs a guarantee that he will not harm them if they are released.

Lattouf said several local and non-governmental agencies, including the Ministry of Interior, the Public Security Department, local NGOs led by the Mizan Law Group (MLG) for Human Rights and other relevant government entities, had       contributed to the project.

“We have succeeded because we united with all the relevant government agencies and local NGOs by coordinating the efforts and sharing tasks,” Lattouf added.

The minister also thanked USAID for providing the necessary funds to buy and furnish the four-storey building that has the capacity to house around 40 women and their children.

“We are really grateful for USAID’s support, as well as that of the European Union and other UN agencies in Jordan who offered their support to this important project,” Lattouf stressed.

Also addressing the gathering was the director of the first-of-its-kind facility, Raghda Azzeh, who explained the three-year process that led to opening the guesthouse, and the instructions that will govern the entity.

“Today is an exceptional day for Jordanian women because we are launching an entity that will provide more fair alternatives for women whose lives are in danger,” Azzeh told the gathering.

Around 40 female employees affiliated with the MoSD have undergone special capacity-building training in May so as to be ready to deal with newcomers and manage the facility.

The guesthouse will provide meals and other necessary items for the women and their children and is also equipped with several private rooms for women with baby cradles, a play area for children, as well as rooms that include sewing machines, computers and hair salon equipment for residents to learn new professions.

The facility also includes several kitchens, balconies, a health clinic, sports equipment, a garden and special rooms to receive the cases. It will be protected with plainclothes by PSD male and female officers.

“Minister Lattouf personally supervised the installation of the equipment and the furniture because we want these women to feel that they are safe and secure,” Azzeh told The Jordan Times during the tour of the facility.

Most of the women in protective custody are kept for involvement in cases of rape, adultery and incest, where they might be the victims, or for leaving the family’s home voluntarily.

On some occasions, women were reportedly killed after being bailed out by family members, even after guarantees had been signed to inflict no harm on them. Around 20 women are murdered annually for reasons related “cleansing family honour” in Jordan.

The executive director of the MLG, lawyer Eva Abu Halaweh, said the facility is a “temporary safe house for women until their cases are solved in a peaceful manner”.

“We have been working with the civil society, government entities, and activists since 2005 to find a decent and human solution for these women other than spending many years of their lives behind bars and we are pleased that this day has finally come with this guesthouse,” Abu Halaweh said.

Meanwhile, Nasser Ensour delivered a speech, on behalf of Interior Minister Samir Mubaidin, pledging the “ministry’s full commitment to ensuring the success of this new experience”.

“The Interior Ministry will follow up with the administrative governors and other relevant security agencies in cooperation with the MoSD to ensure that the guesthouse will operate smoothly and in the best manner,” Ensour told the gathering.

The new instructions for the guesthouse stipulate that “women whose lives are in danger are entitled to be admitted to the guesthouse willingly at any time and during holidays, after being referred by the administrative governor”.

The guesthouse, according to the instructions, will be obliged to receive women, document their cases under strict security and provide them with necessary legal, psychological, social, medical and recreational services. The guesthouse can also receive children accompanying their mothers who are six years old or younger.

Workers in the shelter will evaluate cases and make necessary recommendations accordingly, as the instructions stipulate.