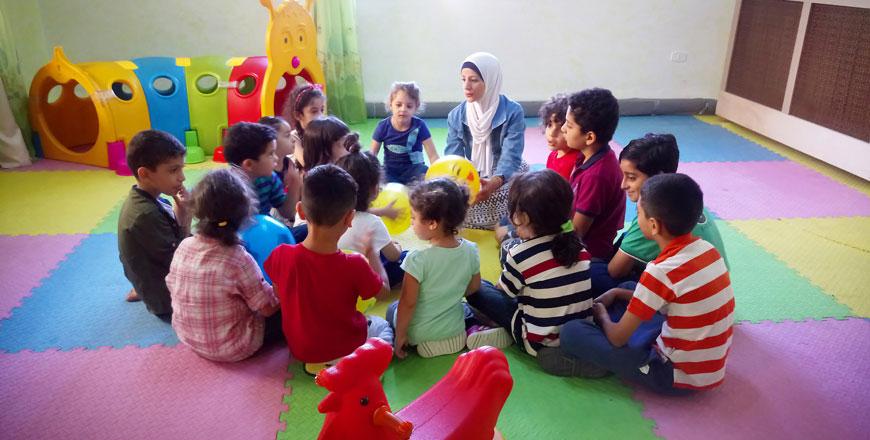 AMMAN — “When I first started working as a caretaker, I realised that nurseries in my area were poorly considered and parents only brought their children because they had no other choice. That is what motivated me to make a change,” says Lana Badran, the owner of the biggest nursery in Hashemi Shamali area, which serves over 20 children.

“This place complies with all safety measures and the care we provide extends beyond simply keeping the children. That is why parents now feel safe to bring them here,” Badran told The Jordan Times, recalling how she took over the nursery where she was an employee when the owner retired after 25 years of work.

Her journey was not exempt from challenges, and high competition and lack of access to cash complicated Badran's endeavours. However, she managed to overcome them with the support of the MicroFund for Women (MFW).

"Obtaining funding to start a business in Jordan is usually easier for males than for females, but [the] MFW provided me with the funds necessary to kick-start the business and the flexibility to return them at my own pace,” she remembered.

Since the beginning of its operations in 1996, MFW has benefitted over 140,000 low income, small business owners served by more than 700 employees over 60 areas across the Kingdom.

In addition, the organisation provides several non-financial services including the Himaya Protection Programme, which assists low-income households to cope with life uncertainties, and the Afiyatuna service, aimed at lowering hospital expenses resulting from health emergencies.

But the financial challenges were not the only ones scattered on Badran’s path, as she had to face social misconceptions over women pursuing business, in addition to obtaining the necessary funding.

“My mother and sister always stood by my side and my husband is very proud of me, but, at the very beginning, he was not so supportive of my goals,” she recalled, complaining that “society delivers this message to entrepreneur women that we are crazy, and that a business is too much for us to manage”, the caretaker stated.

“‘You are a female, you are supposed to stay at home, and you should be taking care of your own children instead of others' — this is the criticism I was getting,” she recounted, explaining that “a lot of people still don't understand that you can balance the different aspects of your life and keep on taking care of your family while being a working woman”.

“I only have Fridays off and I work for many hours, but nursering is my life and it is what allows me to provide my children with a better quality of life,” Badran continued, noting that, thanks to her job, she is now capable of giving her children a better health and education.

“I do it for all those other working mothers out there,” she said when asked about what keeps her going, warning that “many women working in the private sector in Jordan do not have access to daycares at the workplace”.

Last year, during a session organised by the NGO SADAQA and the International Labour Organisation (ILO) on the proposed National Framework for Workplace Daycares, Senior Gender Specialist at ILO Emanuela Pozzan emphasised the importance of the care economy and its economic and social impact, quoting a UN study that showed that, when countries invested 2 per cent of their GDP in the care economy, it increased employment by 4 to 7 per cent.

“If this is addressed in Jordan, it could boost economic participation of women in the country,” Pozzan argued.

In a similar vein, Spokesperson of the Ministry of Social Development Fawaz Ratrout told The Jordan Times that “an increase on the availability of daycares for all families in Jordan would enhance the participation of women in the labour market and the economic development of the nation”.

Asked about her next steps, Badran outlined her plans to own a bus for the pick-up and drop off of children at the nursery, noting that “this service is still not offered in Jordan due to the complications concerning the security measures, but it would spare parents from the effort of commuting from home to the nursery and vice versa”.

“But my goals extend far beyond that, and if enough funding was secured, I would purchase a piece of land and build the first nursery in Jordan in accordance with international standards,”  the entrepreneur added with hope.