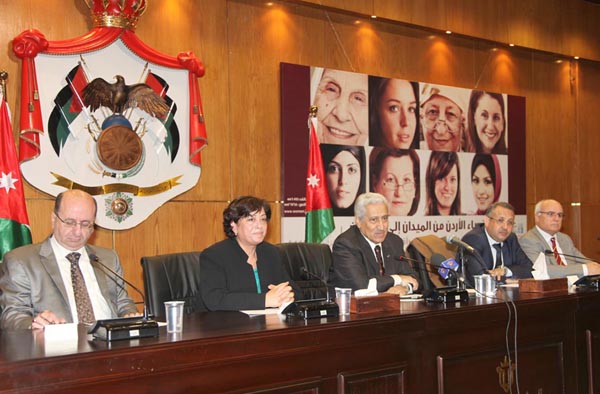 AMMAN — Prime Minister Abdullah Ensour on Sunday urged the women’s movement in Jordan to actively participate in the “democratic, transparent and fair” parliamentary elections on January 23.

During a meeting at the Royal Cultural Centre with representatives of women’s groups from various parts of the country, organised by the Jordanian National Commission for Women (JNCW), Ensour said the ballot box was “the only guarantee of a true democracy in Jordan”.

“There is no life for any nation unless there is democracy and democracy comes through one channel: voting,” the premier stressed.

He said the elections would be “free of any forgery or government interference”.

Turning to the demonstrations in Jordan and opposition parties’ calls to boycott the polls, Ensour said: “Any group or party should not dream of ruling unless they do it through the ballot box.”

“Once the opposition groups reach parliament, then they can change the Elections Law… When I was a deputy, I voted against the Elections Law, but since it passed I have to respect the decision of the majority and accept it,” the prime minister noted.

Ensour warned that “if people do not head to the polls, then the Western media will say that the opposition groups that called for boycotting the elections succeeded and they should rule.”

“Therefore, everyone should vote regardless of their disagreements and reservations regarding the Elections Law,” he added, or else contribute to “conveying the wrong message about Jordan”.

JNCW Secretary General Asma Khader stressed during the 90-minute meeting that the women’s movement still faces many challenges but “we can confront them with our strong determination and our positive participation in the upcoming elections”.

Abul Samen called on the government to offer financial support to women’s groups to help them back female candidates and reach out to the public to encourage them to take part in the elections, especially in rural areas.

Ensour also encouraged women to take leading roles in society, stressing that they “should not ask for their rights to be given to them”.

“Jordanian women are qualified, experienced and well educated. I believe the first step for them to reach advanced positions is to abandon the policy of appointing them in [token] positions because they can do it on their own with their own ambitions and qualifications,” the premier told the gathering.

But activists Mary Hattar and former MP Adab Saoud reminded the prime minister that qualified women were not considered by the government when it was formed last year, or when the Independent Elections Commission (IEC) and Constitutional Court were formed.

In response, Minister of State for Prime Ministry Affairs Nufan Ajarmeh said: “We could not find qualified women to be appointed as members of the Constitutional Court.” He did not elaborate further.

As for the IEC, Ajarmeh said that as it was an independent entity, the government could not interfere.

Towards the end of the session, several women activists listed some of their demands and requested the government’s support in fulfilling them.

Among these demands were amendments to the Civil Retirement Law, which Abul Samen said still discriminated between men and women.

“Women cannot inherit their dead husbands’ pensions once they die if they have pensions as well. They have to choose between their own pensions and those of their husbands and that is not fair,” Abul Samen stressed.

The premier promised to examine and consider the demands in future Cabinet meetings.

Ensour, who described himself as being one of the first supporters of the women’s quota when it was first instated in 2003, concluded the meeting by saying that the next step for the government is to consider doubling the current 15-seat women’s quota in the Lower House.

“We really were hoping to double the seats for the upcoming elections for women, but it did not work out. But this is an issue that the government will strongly consider for the next parliamentary elections,” he said.