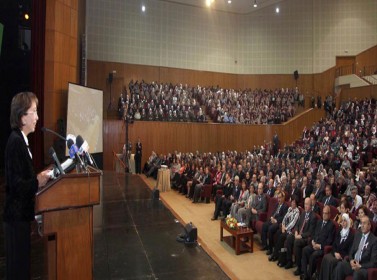 AMMAN - HRH Princess Basma on Monday said the drive for women’s rights is part of a broader, universal aspiration for justice and equality, which all people share and which has impelled the present situation in the Arab world.

“The equality to which every person aspires, depends on there being a general sense of justice, in all its forms, based on the participation of all sectors and groups of society, including women,” she said in an address to the Jordanian Women’s National Forum yesterday.

The two-hour event was held to launch two reports on the situation of women in Jordan and the world: the “National Report 2011: Progress of Jordanian Women toward Justice, Participation and Equality, prepared by the Jordanian National Commission for Women (JNCW), and the Arabic version of the UN Women report, “The Progress of the World’s Women 2011-2012: In Pursuit of Justice”.

Addressing over 2,000 people at the Royal Cultural Palace at Al Hussein City, Princess Basma, a UN Women Goodwill Ambassador, said the two reports “bring home to us, that women's issues must be at the heart of any discussions or reform efforts related to those issues, in order to be addressed fairly and equitably”.

“No doubt the two main subjects of the reports being launched, summarise the situation in the Arab world and all that is going on within it; the demand for justice, participation and equality,” she said in reference to the tumultuous events of the Arab Spring.

“The subject of equality addressed by the two reports expresses a spiritual and humanistic value which may be respected and believed in by all, but the application of which in many cases, is perplexing, due to the practice of double standards, whether at the level of nations… or at the regional and institutional level within countries, or even within the context of the individual family,” the Princess stated.

“The absence of equality at any of these levels results in creating its own specific conflicts and exacerbating the negative implications of inequality,” she added.

Maha Nuaimy, deputy regional director of the UN Women Arab Regional Office, said that the remarkable advances that have been made over the past century in the quest for gender equality, women’s empowerment and ensuring women’s legal rights are evident.

She noted that many countries have outlawed domestic violence and guaranteed women property rights, while more women have risen to positions of power as decision makers.

“Yes, we have witnessed all these transformations with regards to women’s legal rights, yet the existing laws on paper are not translated into equality or justice for millions of women worldwide, which means that justice remains out of reach for these millions,” Nuaimy acknowledged.

She noted that in the judicial sector, there were no serving female judges or prosecutors until 1996, whereas today there are 107.

“The percentage of female graduates from the Judicial Institute today stands at 47, which means that in the future we will see a further increase in the number of women serving in the judiciary,” Khader said.

However, she warned, many obstacles still face the women’s movement, including the exclusion of the word “gender” from Article 6 of the Constitution, which guarantees Jordanians equality before the law.

Discussing legal challenges that still remain for Jordanian women, Khader pointed out that the Family Violence Law that was passed by the Parliament a few years ago still includes many loopholes, while regulations still have not been drafted for the Alimony Fund in the amended Personal Status Law.

The report also addresses women’s participation in the economy, which remains low, with women making up only around 15 per cent of the Kingdom’s workforce.

Khader said the report’s recommendations include continuing to lobby for changing or scrapping all laws that discriminate against women, ensuring the proper atmosphere to further women’s economic participation, and sustaining efforts to increase women’s representation in legislative bodies.