Women take over helm of media outlets for one day 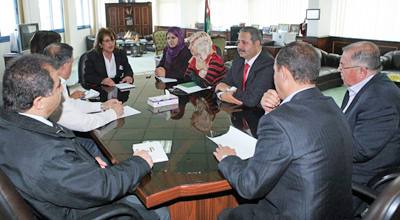 AMMAN - Women journalists proved their worth on Tuesday, with some of the country’s main media outlets appointing them as editors-in-chief for the day, marking International Women’s Day.

Although it was a one-day appointment, female journalists said they see decision as recognition by their management for their effective participation in the media sector and women’s contributions in the development of the profession.

The Jordan Times, Al Rai and the Jordan News3 Agency, Petra, were among outlets that were led by experienced female journalists yesterday.

“Although the appointment is mostly symbolic, I was overwhelmed by my colleagues’ warmth and support. It made me feel appreciated and recognised,” Hiba Sabbagh, who took over the reins of Al Rai yesterday, told The Jordan Times.

Noting that she has been a journalist since her first year at university in 1993, Sabbagh said she never felt she was a victim of discrimination while doing her job at the Arabic daily since 2005.

She noted that female journalists have a responsibility to be up to the challenge and compete in a male-dominated profession.

“There is nothing that can prevent female journalists from holding the highest position in the media sector. Yet, they have to prove their competence and convince their male colleagues, as well as females, of their potentials and leadership capabilities,” Sabbagh said, emphasising that women must not be seen as representing only themselves, but men as well.

Sabbagh added that when she was informed about her one-day stint as an editor-in-chief, she thought she would not be in a position to take real decisions, but Al Rai Editor-in-Chief Abdul Wahab Zgheilat authorised her to be fully in charge of the editorial policy.

“I have been receiving News3 reports since I sat in this chair and I have been assigning them to reporters and editors for action,” she said, adding: “It is a good feeling.”

Jordan Press Foundation (JPF) Director General Nader Horani said the foundation, which publishes Al Rai, The Jordan Times and Hatem, treats all staff members based on their productivity and competence and has no reservations against women holding senior editorial or administrative posts, citing The Jordan Times, which had two female chief editors in the recent past.

“Women constitute nearly 15 per cent of JPF staff; this percentage is considered high and close to the levels in the public sector. We are concerned with securing a suitable work conditions for all women, particularly those who are married and we contracted a nearby kindergarten at the foundation’s expense to host their children while they are at work,” he told The Jordan Times yesterday.

Meanwhile, Petra’s director general for the day, Majida Ashour, said she used to oppose the decision to appoint women as heads of media outlets for one day, but realised the significance of the move after she was put in charge of the News3 agency yesterday, noting that it was a reminder to her fellow journalists about the importance of women as their colleagues and partners in the decision-making process.

“Women have proven their capability to be leaders. We made it as ministers, deputies, senators, and of course as journalists despite the multi-tasking role women have to play in their households and society,” she told The Jordan Times yesterday.

Noting that 200 female journalists are registered at the JPA, constituting 25 per cent of the total number of members, she said women have to take the initiative and run for the presidency.

“Sadly, women still do not believe in themselves and they rarely vote for a female candidate. In order to succeed in making it to the president’s post, women have to lobby and agree on a name to support in the upcoming elections in order to compete with men,” she told The Jordan Times.

Despite active participation in the profession, less than 1 per cent of female journalists make it as decision makers in the media sector, Jaradat said.

Citing a study she prepared last year, the JPA council member said 54 per cent of journalism students in universities are women, but only a few of them join the media sector because of societal perceptions of journalism as a masculine profession.