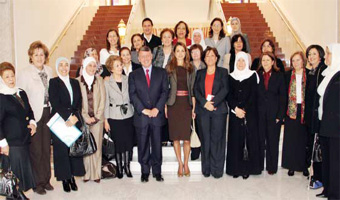 AMMAN - His Majesty King Abdullah on Tuesday urged women to actively contribute to efforts aimed at achieving reform and the modernisation process, according to a Royal Court statement.

At a meeting, attended by Her Majesty Queen Rania, with several women activists, the Monarch said he seeks a more effective role of women in the decision-making process and in the national dialogue committee, which is tasked with drawing a roadmap for comprehensive reform, the statement said.

His Majesty called for a “swift” launch of the nationwide dialogue to arrive at a “consensus” on the laws governing political and civil action in the country, especially the elections and political parties laws, where women should have their say.

Later in the day, women activists described their meeting with Their Majesties as “positive and transparent”.

Secretary General of the Jordanian National Commission for Women Asma Khader said the meeting, which coincided with International Women’s Day, tackled all aspects related to women and social reform.

“It was an open and transparent meeting and we were able to convey many of our concerns and demands directly to the King not only as organisations but as citizens,” Khader told The Jordan Times.

Khader said part of the meeting focused on the expected version of the Elections Law that “would guarantee better representation to all segments of society, including women”.

She revealed that the women’s movement handed over to the King a list of proposals to further women’s rights in Jordan.

President of the Jordanian Women’s Union Amneh Zu’bi also described the meeting with the King and the Queen as positive because “we were able to convey the demands of the Jordanian people and not only women”.

“An atmosphere of openness and frankness prevailed during the meeting and the women present brought up many daring and urgent issues,” Zu’bi added.

Activist and lawyer Reem Abu Hassan said the meeting was special because it included women from all sectors of society and all governorates, including NGOs, judges, lawyers and representatives from Christian organisations.

“Our discussions went further to address social reform and important issues such as the Citizenship Law and the withdrawal of citizenship of some citizens because it is creating social fears and instability,” Abu Hassan said.

“The King discussed with us ways to enhance the role of youths in the country’s reform process,” Abu Hassan added.

Judge Ihsan Barakat, the first woman to assume the post of attorney general in Jordan’s history, called for similar meetings on a regular basis.

“Our society is developing and women represent more than half the society,” Barakat said.

At the same time, she added, “the King and Queen were very receptive to our ideas and understanding of all the remarks and demands presented, and the King promised to take everything we said into consideration”.