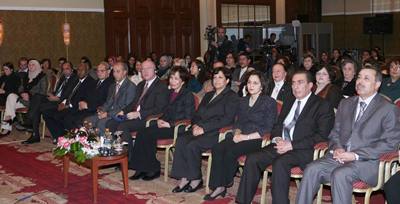 In a workshop yesterday held by UN agencies in Jordan titled “Cultural Change to End Violence Against Women”, she highlighted progress made in advancing the status of women in the Kingdom.

“We are convinced that the lives of women in Jordan are precious and society has to protect women because their rights are basic human rights,” Princess Basma said.

She praised the efforts that were exerted in Jordan to “break the silence surrounding violence against women and the problem of so-called honour murders”.

“We have witnessed an increase in voices rejecting so-called honour crimes as well as demands by the civil society to find solutions to these problems,” the Princess said during the event, held in cooperation with the Jordanian National Commission for Women (JNCW) and the Family Protection Department (FPD) of the Public Security Directorate.

However, despite these efforts, the number of so-called honour killings reported in Jordan each year remains the same, the Princess noted.

“We have not seen a significant decrease in the reported cases of so-called honour murders in Jordan and we still read sad stories in the local press,” Princess Basma told the gathering.

She noted that this requires greater efforts to raise awareness and combat the issue at all levels, including “approaching women in the Upper and Lower Houses of Parliament to take the necessary steps to amend laws concerning these murders and violence against women”.

Each year, Jordan witnesses around 20 cases of so-called honour killings that mostly target women. Globally, some 5,000 women are murdered annually for reasons related to family honour, according to international figures released in 2000.

He praised Jordan’s achievements in combating violence against women and ensuring gender equality by implementing international human rights agreements the Kingdom has ratified as well as national strategies.

Stevens said the UN family is “firm in continuing its support to Jordan in monitoring cases of violence and promoting support mechanisms for victims, along with adopting and enforcing laws to punish this form of crime”.

Meanwhile, JNCW Secretary General Asma Khader stressed the importance of effecting cultural change in the community regarding violence against women.

She highlighted the role of the JNCW in implementing components of the national strategy for Jordanian women through the Women’s Complaints Office and Shama, the national network to combat violence against women.

Khader also stressed the need to focus on promoting “a culture of human rights and dialogue and establishing the rule of law in order to change cultural patterns that tolerate violence against women”.

At yesterday’s event, FPD Director Brigadier Muhammad Zu’bi noted that despite Jordan’s achievements in the area of women’s empowerment, activists and officials still face “many challenges”.

He urged all governmental and non-governmental organisations to provide women with support as well as legal guidance and services to ensure they are aware of their rights in all areas.

At the end of the one-day event, participants agreed that in order to end violence against women, social attitudes in the country must be changed through a male-inclusive process.

Other recommendations included lobbying parliamentarians to support laws that protect women against violence.

The workshop culminated the “16 Days of Activism against Gender Violence”, which began on November 25, with the aim of raising community awareness of the phenomenon of violence against women.