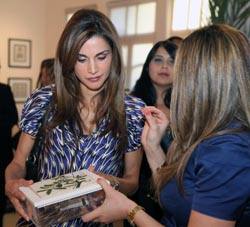 Titled “TIRAZ” and held at the JRF showroom in Jabal Amman, the exhibition aims to encourage and improve handicrafts made by women benefiting from the various JRF projects in Bani Hamida village, Wadi Al Rayan and Jabal Al Natheef.

JRF acting Director Ghaleb Qudah briefed Her Majesty about the importance of these projects to the women, and how they help them support their families.

He also noted that this year’s exhibition includes enhanced Jordanian cultural products that can better compete in the international market.

JRF Showroom Director Reem Al Shurafa said the foundation has come up with new designs that cater to all tastes, while maintaining the Jordanian cultural feel.

Supported by Société Générale Bank, the exhibition will start receiving visitors from today. The JRF showroom in Jabal Amman is open from 830am till 700pm on weekdays, and from 1000am till 600pm on Fridays and holidays.

Established in 1995 and chaired by Her Majesty, the JRF is a nonprofit Jordanian NGO with a mission “to promote, in partnership with stakeholders, the development of a dynamic Jordanian society by initiating and supporting sustainable social, economic and cultural programmes that empower communities and individuals based on their needs and priorities”, according to its website.

From the outset, the foundation initiated socio-economic projects for women to provide employment opportunities that enhance their livelihoods while developing their knowledge and skills in handicraft production and entrepreneurship.

These projects have benefited thousands of individuals, directly and indirectly, and continue to generate income for vulnerable communities and families, according to the JRF website.