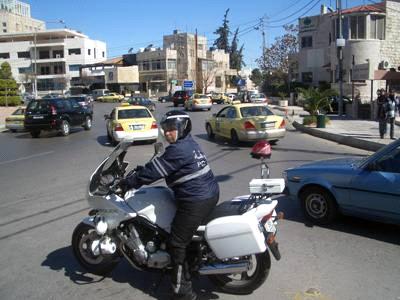 Being the first woman to begin such training, she knew she would face scrutiny from friends and family in her conservative native town of Karak.

According to Sarayreh, she received both encouragement and ridicule from her peers, yet her passion to serve as a motorcycle traffic policewoman sustained her during the first six months of training.

“I never doubted my decision. My desire to serve as a policewoman drove me to make what I felt was the right decision,” she told The Jordan Times in a recent interview.

That was five years ago. Two months after Sarayreh, now 29, began her training, 12 other policewomen followed in her footsteps.

Only five survived the demanding job and the ensuing social criticism, Field Commander of Policewomen Major Basma Hajaya told The Jordan Times. However, she acknowledged there has been a steady growth in the number of women entering the police force in general.

Along with this increase in enrollment, acceptance by the public has grown as female police officers have been seen more frequently patrolling the streets.

Head of the Traffic Department Colonel Adnan Freih told The Jordan Times that the decision to allow policewomen into the department has proved a sound one.

“Traffic policewomen were integrated into the department in 2002,” Freih noted, adding that since then, the department has encouraged their enrolment.

He commented that in certain instances they even “surpassed their male counterparts in physical, mental and emotional fitness”.

At present, there are 103 policewomen serving in the capital, Jerash, Aqaba and Irbid, according to Hajaya.

Twenty-seven-year-old policewoman Kifah Ramadan, a three-year veteran of the job, said that being a female police officer on a motorcycle is challenging because she must deal with people who might oppose her decision while still maintaining a professional attitude.

While patrolling with her boss Major Hajaya, traffic officer Tamara Haddad said that she was overwhelmed when she was finally accepted into the police force, after trying for seven years.

Haddad, the eldest among six sisters, found all the encouragement she needed from family and relatives in Madaba where she lives.

“She is looked upon as a role model by her youngest sister, who is planning to follow in her sister’s footsteps after finishing high school next year,” Haddad’s father Maen said.

“Aside from my love for the job, I was also encouraged to enter the police force as a woman because of the competitive pay and benefit packages,” she added.

Policewomen receive attractive benefits like a starting salary of JD350 per month and medical and social insurance, Head of Public Relations at the Traffic Department Major Maen Khasawneh said.

“Policewomen with infants are given special attention too,” Khasawneh added, referring to the new, fully furnished nursery in the department.

Female police officers still face other challenges. Sarayreh, who currently supervises six other policewomen in Jabal Amman, must drive 129 kilometres from her post in Amman to her home in Karak in order to see her family.

“I prefer to see my family every day,” she said, explaining that she leaves Karak as early as 300am, and finishes work to return to Karak at noon.

Sarayreh’s mother and her 24-year-old brother Ibrahim applauded her success.

Her brother, an officer in the Civil Defence Department, was shocked when his sister’s name was announced on the department’s radio as the first motorcycle policewoman. Nevertheless, he felt proud of her achievement.

“It is so typical of Najieh’s character to always do the unexpected, but proper thing,” he said, adding that his sister is “a sister of men” a slang expression which means she is a reliable and trustworthy person.

The only obstacle that Sarayreh faces now as a result of her profession is a potential husband’s demand that she stop riding her motorcycle.

“Giving up my job means giving up everything I live for and believe in.”