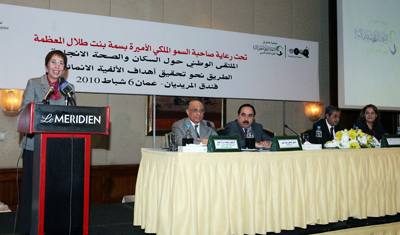 “Population and reproductive health are important factors at this stage since we are in the middle of the millennium development process, which ends in 2015 and placed the population problem as one of the main reasons of poverty,” the Princess said.

The Princess made the remarks during a one-day event titled, “The National Forum on Population and Reproductive Rights The Road to Ensure the Millennium Development goals”.

The eight MDGs - which range from halving extreme poverty to halting the spread of HIVAIDS and providing universal primary education, all by the target date of 2015 - form a blueprint agreed to by all the world’s countries and leading development institutions.

The Princess said Jordan has made tangible progress in the MDGs, such as a “slight decrease in fertility rates”.

Princess Basma acted as patron at the event, which was also attended by HRH Prince Raad Ben Zeid and other ministers and foreign delegates from Bahrain, Lebanon, Palestine, Syria and Tunisia.

The forum, which featured presentations on reproductive health in Jordan, was held by the Amman Jordanian Society (AJS) in collaboration with the International Planned Parenthood Federation (IPPF).

The AJS was established in 2008 in a bid to contribute to existing governmental and civic efforts that deals with population and women’s and children’s health, according to its president, Nuha Majali.

The society takes part in government programmes to improve women’s and children’s status in the country by conducting research and studies and establishing specialised clinics and health centres to provide health services.

The IPPF is a worldwide movement providing reproductive health and family planning services in over 180 countries.