Randa Habib's 'Hussein and Abdullah' hits the stands in English 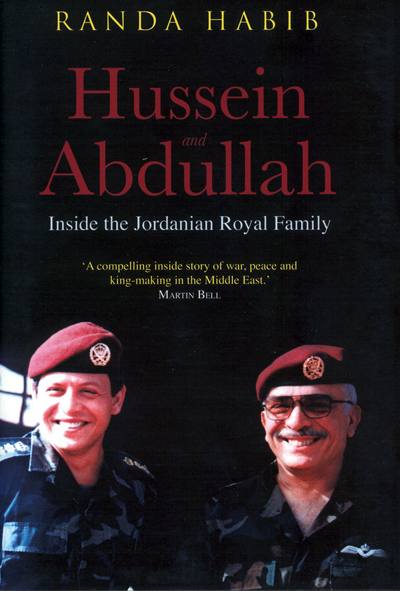 Journalist Randa Habib's book Hussein and Abdullah Inside the Jordanian Royal Family was recently published in English and is now available worldwide.

In the book, Habib, director of the Amman bureau of Agence France-Presse since 1987, describes how His Majesty the late King Hussein preserved Jordan against all odds and maintained neutrality in the face of conflicting interests of neighbouring countries, as well as how His Majesty King Abdullah is positioning himself as a peace broker in the hopes of ending the 60-year Middle East conflict.

The French daily Le Monde described the book, published in French in 2007 and in Arabic in 2008, as “precise and concise”, saying Habib “was a privileged witness to much confidential information”.

Meanwhile, author Martin Bell, UNICEF ambassador and former British MP, described the book as “a compelling inside story of war, peace and king-making in the Middle East”.

Habib, a French journalist of Lebanese origin, has spent 25 years covering war, politics and economic development in the Middle East.

“A highly informative source on the recent history of Jordan, Habib’s eye for detail and keen sense of drama combine to make 'Hussein and Abdullah' not just a useful record but also a fascinating book to read,” said Avi Shlaim, author of Lion of Jordan The life of King Hussein in War and Peace.

Fouad Ajami, professor of Middle East studies at Johns Hopkins University and writer, described the publication as a memorable book.

The politics of the Arab world - the real workings of it - are opaque. Rulers take their secrets to the grave, there are no papers, no honest memoirs. Thanks to Ms. Habib, the reign of King Hussein is an exception,” he said.

Amman-based Habib has reported extensively in Iraq and other areas of conflict and interviewed royalty and leaders throughout the region.