AT A GLANCE | The Jordanian National Comission for Women 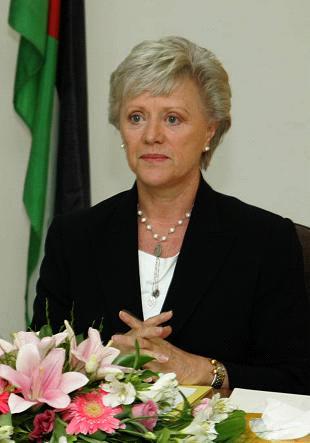 HRH Princess Muna on Sunday chaired the 31st board meeting of the Jordan Nursing Council (JNC). During the meeting, the members discussed the council's new headquarters and preparations for the third nursing conference, slated to be held April 27-28 in cooperation with the Health Ministry. The board also discussed the council's by-laws, in addition to the financial committee's recommendations for next year's budget.

AMMAN (Petra) –– Prime Minister Samir Rifai on Sunday met with Saudi Minister of Education Prince Faisal Ben Abdullah Al Saud and discussed bilateral ties and prospects for further cooperation. During the meeting, Rifai underlined the distinguished relationship between the Kingdom and Saudi Arabia, expressing Jordan's keenness to place its educational expertise at the disposal of the Gulf country. For his part, Prince Faisal expressed his country's willingness to benefit from the Kingdom's expertise, particularly in terms of utilising technology to improve education. Also yesterday, HRH Prince Raad, president of the Higher Council for the Affairs of People with Disabilities, met with the visiting Saudi minister and discussed means to enhance cooperation.

AMMAN (Petra) –– Prime Minister Samir Rifai on Sunday congratulated Senate President Taher Masri on his recent appointment. During a meeting yesterday, the premier and Masri discussed means to enhance coordination between the government and the Senate to best serve the country, citing His Majesty King Abdullah's vision on social, economic and political development as outlined in the Letter of Designation.

AMMAN (Petra) –– Minister of Foreign Affairs Nasser Judeh on Sunday met with his Cypriot counterpart Marcos Kyprianou and discussed means to boost ties and the latest developments regarding efforts to attain peace in the region. During the meeting yesterday, Judeh underlined the importance of enhancing economic cooperation between the Kingdom and Cyprus to serve the interests of both countries. He highlighted Jordan's efforts to bring about peace and stability in the region, particularly those aimed at launching serious negotiations on the basis of a two-state solution and the 2002 Arab Peace Initiative. Judeh stressed the need to establish an independent and viable Palestinian state with East Jerusalem as its capital, underscoring the urgency of bolstering international efforts to end the current impasse in peace efforts. At the end of the meeting, Judeh and Kyprianou signed an agreement to cancel visa requirements for holders of diplomatic passports and high-ranking officials.

MADABA (Petra) –– The Ministry of Health designated 20 hospitals across the Kingdom to receive H1N1 (swine) flu patients. During a scientific symposium on precautionary measures to prevent the spread of the virus, Health Minister Nayef Fayez underlined that the decision seeks to expand medical services provided to people infected with swine. Fayez also called on physicians to take the H1N1 vaccination. Since the discovery of the first case in June, over 3,000 cases have been registered in the Kingdom, with 16 fatalities.

AMMAN (Petra) - The Ministry of Education has concluded preparations for the Tawjihi (General Secondary School Certificate) winter session exam, which will begin on December 28, Education Ministry Examination Department Director Husni Sharif said on Sunday. A total of 140,627 students registered for the exams, he said, adding that the ministry has designated 1,759 examination halls throughout the Kingdom. According to Sharif, 20,000 teachers will monitor the examination process and 14,885 teachers will grade the exams in 71 correction centres across the Kingdom.

CAIRO (Petra) –– Director General of the Jordan News3 Agency, Petra, Ramadan Rawashdeh on Sunday underlined the need to enhance journalism to ensure it reflects economic, social and political life in Arab countries. During his participation in the 37th meetings of the General Assembly of the Federation of Arab News3 Agencies Rawashdeh, who is president of the federation, highlighted the importance of the event in tackling issues of concern to Arab News3 agencies.