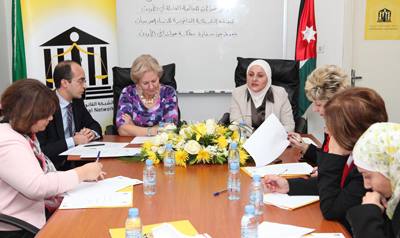 AMMAN - The embassy of the Netherlands has approved a JD170,000 grant to the Arab Women’s Legal Network (AWLN) for a project that will focus on trial observation as a means to enhance human rights and improve the conditions of women.

During a press conference on Sunday to announce the grant, AWLN President Ihsan Barakat said the funding will be used to hold roundtable sessions, workshops and specialised training on the proceedings of fair trials in a bid to empower women working in the judicial field.

The project will also work to raise awareness on gender issues and ways to deal with women during court proceedings, she told reporters.

“When monitoring trial proceedings in a case on violence against women, for example, it becomes easier to carry out fair trials” in line with international standards, Barakat added.

The Amman-based AWLN will begin implementing the 20-month project in January, she indicated.

“To boost human rights, the Netherlands embassy has chosen to work on three issues: Enhancing the rights of women, boosting the freedom of the media and the rule of law,” Dutch Ambassador Joanna van Vliet said, noting that this project will focus on the first and third issues.

“It is a direct contribution to the rule of law… Also, through focusing on cases against women, it will help enhance the role of women,” she added.

Remarking on the observance just over a week ago of the anniversary of the Universal Declaration of Human Rights, the ambassador noted that the declaration applies to everyone around the world, regardless of their gender.

“However, 61 years after the adoption of the declaration, human rights are still abused, women are subject to violence, journalists are prevented from doing their job and opposition leaders are being silenced,” she said, stressing that the Netherlands' foreign and domestic policies focus on fostering human rights.

"In Jordan, as the debate on the issue is going on, we thought the project might be one of the best ways to work in this field," she added.

“There are cases of violence against women in Jordan and in many countries. So we seek to raise awareness among men and women, and within the legal system, and monitoring court cases is an important aspect to improve the situation,” the ambassador explained.

Established in 2004, the AWLN seeks to improve the capabilities of Arab women working in the legal profession and increase awareness regarding women’s rights at all levels, according to the network’s website.

The UN General Assembly adopted and proclaimed the Universal Declaration of Human Rights on December 10, 1948. More than 150 countries have adopted the declaration, including Jordan and the Netherlands.