WARCATI seeks to educate women on their legal rights 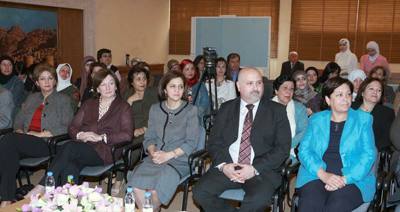 The project, “Women and Children's Rights through Access to Information” (WARCATI), uses computer programmes and technology to educate women on their legal rights.

The software will be distributed to women and installed on computers at courthouses, including Sharia courts, JNCW Secretary General Asma Khader said at the launch yesterday.

Implemented by UNDP's Information and Communication Technology for Development in the Arab Region (ICTDAR), WARCATI is a women’s empowerment initiative that uses technology as a tool to give women greater understanding and knowledge of their rights.

It is specifically designed to benefit women in difficult circumstances, such as those in failed marriages who find themselves without any means to support themselves or their children.

The initiative uses ICT to empower women’s support mechanisms by developing relevant legal information in a digital format and disseminating it through CDs, websites, video and audio tapes, and telephone hotlines.

"I hope that this project will ensure the rights of women in the Arab world and that no woman would fall victim to ignorance, fear or violence,” said Ziad Haddara, senior programme officer at ICTDAR. “Then we are certain that we are advancing in the human development field," he added.

The project materials developed in Jordan include CDs, booklets and a website (www.warcati.jo), which contains in-depth information on hundreds of FAQs, legal forms, requests and pleas in digital and printable format.

In addition, there will be training programmes for community workers that assist women in court to guarantee the proper use of the project materials.

Development of the computer software was the third and last phase of the project, which was developed in partnership with ICTDAR and support from the Spanish embassy and began in 2007.