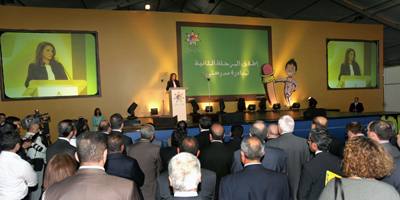 Her Majesty Queen Rania announces the launch of the second phase of Madrasati on Monday and tours an exhibition of booths set up by schools that will benefit from the initiative (Photo by Nasser Ayoub )
AMMAN - Her Majesty Queen Rania on Monday launched the second phase of the Madrasati (my school) initiative, under which 100 schools in Jerash, Ajloun, Balqa and Madaba will be upgraded and renovated.

The initiative, which seeks to improve the educational environment in public schools desperately in need of repair, is one of a series of projects led by the Queen for the advancement of the Kingdom's educational institutions.

"Education is today’s most valuable investment. By striving to achieve the best for our children today, we ensure they become a positive force of tomorrow,” Queen Rania said in her address at yesterday’s launch.

She also highlighted the importance of building mutual trust among all stakeholders and partners.

"Our private partners trust that these students will produce a brighter future for all of Jordan and these students know that this trust is not a gift; it is a loan they will have to pay back to future generations.”

Launched by the Queen in April 2008, Madrasati seeks to make education a social responsibility by pairing corporations and NGOs with public schools in the Kingdom that need to be upgraded. It is intended to benefit some 165,000 students over a five-year period.

Besides refurbishing 500 public schools in need of infrastructure and maintenance work, the initiative also entails training teachers and providing them with modern technology.

Her Majesty yesterday commended the efforts of all those who have made Madrasati possible.

"We have built a circle of trust and we are delivering on the promise to build a better learning environment for our children. But if we want our future to be solid, we must continue to strengthen its foundations,” she noted.

By building partnerships between community members and public and private institutions, Madrasati is now supported by four public departments, 55 private sector companies and more than 15 NGOs, according to a statement received by The Jordan Times yesterday.

Under the second phase, school renovation is due to begin at the end of this month, Madrasati Director Danah Dajani said at the ceremony which brought together representatives from major corporations, NGOs and media figures as well as teachers and children from the schools to be renovated.

During the first phase of the initiative, 100 schools in Amman and Zarqa were renovated; in addition, programmes focused on enhancing the quality of education and upgrading the learning environment were implemented.

At Monday’s launch, designed to encourage the private sector to support selected local schools, students set up their own booths detailing the needs of their schools, including safety requirements, basic amenities and heating.

Touring the exhibition, Her Majesty stopped by the individual star-shaped booths which showcased photographs, drawings, maps and cartoons by the schoolchildren depicting the conditions of their classrooms and the damage caused by years of neglect.

One image portrayed a school with broken windows, while others revealed exposed electric wires and overcrowded classrooms.

One of the schools to be covered by the second phase is Hasnaa Ben Muaawya School for Girls in Salt.

Its principal, Mais Aboudi, described the initiative as a “blessing”, noting that the school “needs radical renovations”.

There are 760 students enrolled at the school, which needs new toilets, water taps, fences, yards, chalkboards and an appropriate heating system, according to Aboudi.

"It is frightening to walk in the corridors and see exposed electric wires… the lighting is bad and the chairs are broken,” she told The Jordan Times.