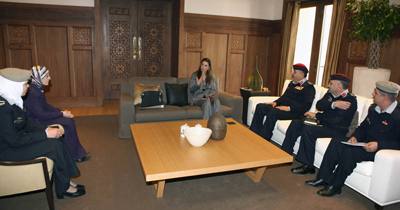 Her Majesty Queen Rania meets with CDD officials and four specialised trainers on Wednesday (Photo by Nasser Ayoub)
In response to Her Majesty Queen Rania’s call to support the conflict-affected children of Gaza, four volunteers will head to the enclave later this month to provide training and psycho-social support to several NGOs serving towns and areas not covered by UN agencies.

Working out of the Jordanian field hospital in Gaza, the four trainers will deliver a programme based on a Training of Trainers model designed in collaboration with UNICEF.

Throughout the four-month programme, the trainers will also provide relief and ground support to affected areas.

During yesterday’s meeting, Her Majesty thanked the volunteers for demonstrating courage in their efforts to offer support and aid to the traumatised victims of war.

The curricula will include explanations of psychological trauma, methods to detect and overcome trauma as well as an assessment of the psychological impact the conflict has on children and teenagers.

The training will also tackle volunteers’ common shortfalls and mistakes in order to enhance knowledge and understanding on these issues among workers already operating in the field of psycho-social support in Gaza.

After four months, the trainers will return to Amman to brief eight additional counsellors in Jordan, who will continue work in Gaza, thus ensuring sustainability of the project.

The trainers are Suha Mssallam Hurb Al Hroob, a specialised trainer in the field of psychological support with experience in the CDD Ambulance Department; Kayed Lutfi Al Khrabsheh, a volunteer for the Amman-based NGO Questscope and a lecturer in the field of Drug Prevention and Medical Sociology; Shireen Mohammad Abdullah Al Sarairah, who has worked extensively as a psychological supporter and counsellor in emergency centres; and Suleiman Daraiseh, who served in the CDD Ambulance Department for two years.