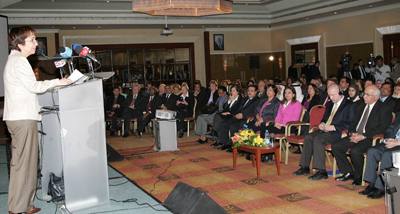 ‘HRH Princess Basma delivers an address at a ceremony marking International Women’s Day, held by the UN and the Jordanian National Commission for Women, on Wednesday (Petra photo)
AMMAN - HRH Princess Basma on Wednesday said Jordan rejects all forms of domestic violence including so-called honour crimes, stressing that efforts should be doubled to ensure a safer environment for women.

"We should all redouble our efforts in combating violence against women so that our society will not suffer in any way," she added.

Annually around 20 women are reportedly murdered in Jordan in crimes related to family honour. Globally, the UN estimates that over 5,000 women are murdered each year for the same purpose.

"We are grateful for what the government has done so far to enhance women's status, but we call on them to exert more and more effort to eradicate violence against women," the Princess said at a ceremony marking International Women’s Day, held by the UN and the Jordanian National Commission for Women (JNCW).

The campaign to end violence against women was launched in March 2008 and will continue until 2015. The objective is to raise public awareness and increase political will and resources for preventing and responding to all forms of violence against women and girls worldwide. For this purpose, the framework for action provides an overall “umbrella” for the efforts to be undertaken at global, regional, national and local levels.

More than five million people worldwide have joined the United Nations' "Say No to Violence Against Women" campaign and added their names to a call to make ending violence against women a top priority for governments worldwide including governments in the Arab region.

UN Resident Coordinator Luc Stevens said International Women’s Day is a reminder "to us all that we will never succeed in overcoming poverty and achieving development, dignity and justice for all unless we ensure that women’s rights are promoted and protected".

"This is a cause to which the United Nations in Jordan remains a committed partner, but it is also a cause that demands a collective effort. So contribute and help make a difference," Stevens noted at yesterday’s ceremony

"Do your bit to ensure that all Jordanians - men and women - enjoy the freedom of equality, in which all children are valued and given equal opportunities whether they are boys or girls, and in which every Jordanian can live in dignity, free from violence and fear, and filled with the hope of a bright, safe and rewarding future," he added.

A 10-minute documentary developed by UNIFEM and the JNCW that included testimonies of women who were subjected to violence was screened at the event.

UNIFEM launched a report on Women’s Rights (Who Answers to Women) and a panel discussion on violence against women was held to shed light on the Kingdom’s achievements and challenges ahead.

In addition, an exhibition of handicrafts made by the UNRWA/Women’s Programme Centre and drawings on the topic of the event by UNICEF/government and UNRWA schoolchildren were also show-cased.