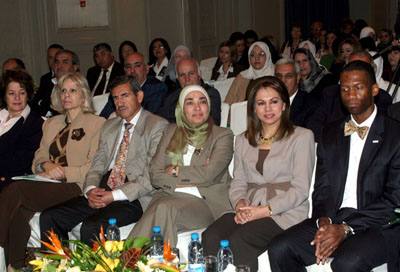 Higher Population Council Secretary General Raeda Qutob, Minister of Planning and International Cooperation Suhair Al-Ali and USAID Mission Director Jay Knott at the launch of the 2008-2012 Reproductive Health Action Plan on Tuesday (Petra photo)
AMMAN - The Kingdom needs to work harder at promoting family planning practices and expanding services if it expects the fertility rate to drop over the next five years, health and population authorities said on Tuesday.

Citing the high population growth rate, officials said the country needs to pay attention to the impact of the prevailing high fertility rate on resources and the quality of life.

In her address at the launch of the 2008-2012 Reproductive Health Action Plan yesterday, Higher Population Council (HPC) Secretary General Raeda Qutob said one of the key challenges is eliminating prevailing negative perceptions among the population about family planning.

The action plan, which is supported by the Ministry of Planning and International Cooperation and USAID, is based on nine components, according to Qutob.

She said the plan will work on improving the quality and effectiveness, reproductive health and family planning services while enhancing public awareness of these issues, ensuring greater and more affordable access to quality services, continuing training of health practitioners, encouraging private sector participation and utilising updated data for policy planning.

One component of the plan targets young people as well as efforts to eliminate current behaviour that ultimately affects the health and well- being of both mother and child, including the problem with exclusive breastfeeding and contraceptive use.

The latter has been a matter of concern for family planning authorities who have seen a drop in contraceptive use which is directly related to fertility rates.

The latest studies show that modern contraceptives such as IUDs, pills, injections and condoms are still not widely used despite efforts to promote them. The rate of women using contraceptives was 41 per cent in 2002 and 42 per cent last year. In addition, 40 per cent of women who use contraceptives discontinue their use within a year and 30 per cent have unplanned pregnancies.

While the fertility rate in Jordan has declined over the past decade, it has not changed much over the past three years. It was 3.7 births per woman in 2005 and 3.6 last year and the HPC hopes to bring it down to 3.1 by 2012.

According to official statistics, only 40 per cent of children in Jordan are breastfed within the first hour of birth - a figure health officials say is lower than regional and international rates and should exceed 75 per cent. At the same time, only 19 per cent of women in the Kingdom breastfeed their babies exclusively.

Making sure fertility rates are kept balanced is crucial to stop further draining of Jordan's already limited resources. At an average increase of 3.6 per cent each year, the Kingdom's population growth is still one of the highest in the world. The country’s population grew from 2.1 million in 1979 to 5.7 million last year.

Minister of Planning and International Cooperation Suhair Al-Ali, who launched the health plan yesterday, said effective family planning practices could translate into positive social and economic returns for the population. She said the plan aims towards the achievement of sustainable development and the Millennium Development Goals (MDG) by balancing population growth with socio-economic growth rates in line with targets specified in the National Population Growth Strategy.

Al-Ali explained how the government works towards the achievement of the MDGs and the objectives outlined in the National Agenda/We are All Jordan initiative.

“The 2007-2009 executive programme includes a social welfare pillar that outlines clear and specific policies aiming to improve health standards for the Jordanian citizen at all levels. Reproductive health services, data and information are linked with poverty alleviation programmes,” she said.

The minister noted that the Kingdom has made positive achievements overall in affording its population basic healthcare, with immunisation coverage standing at 95 per cent and basic health services available to 97 per cent of the population.

Al-Ali pointed out, however, that Jordan's fertility rate was higher than Syria, Egypt and Tunisia where it stood at 3.5, 3.2 and 2 births per woman, respectively.

Meanwhile, USAID Mission Director Jay Knott said the 2nd Reproductive Health Action Plan needs to live up to its name by ensuring action is taken to achieve its objectives. He noted that both the content and direction of the plan have been enhanced by the increased number of stakeholders from both the private and public sectors and NGOs.