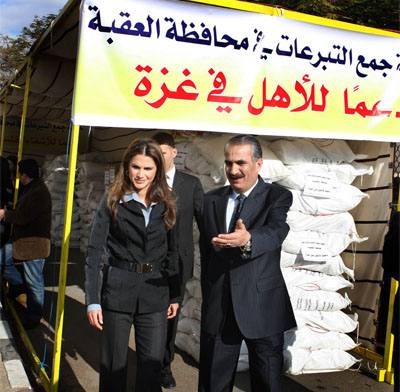 AQABA (JT) - Her Majesty Queen Rania met with local officials in Aqaba on Wednesday to support efforts in collecting relief packages for Palestinians in the besieged Gaza Strip.

Also yesterday, Her Majesty voiced her opinion about the humanitarian crisis in the coastal enclave, according to a statement yesterday by the Royal Court.

“What is happening in Gaza today is not only a violation of international law, of universal human rights, not only a humanitarian crisis,” she told Al Jazeera English in an interview.

“What is happening in Gaza is a crisis of human dignity.”

The Queen, who earlier this week donated blood to help the victims of the ongoing conflict, called the attacks “a continuous and cruel bombardment of a people who are already under siege”.

“Even before the current crisis, the people in Gaza were living in poverty, hunger and isolation with minimal access to basic sustenance and services,” she said, calling on international aid agencies and civil society to speak out and step up out their efforts.

In an opinion piece published by Arab daily News3papers on Tuesday, the Queen urged citizens to do their utmost to help alleviate some of the pain and suffering of people in Gaza.

The Jordan River Foundation (JRF), chaired by Queen Rania, launched a campaign this week to collect funds and in-kind assistance for victims of the attack and the siege.

Concerned citizens interested in donating money to the JRF campaign can visit Jordan Kuwait Bank’s main branch in Shmeisani (account number 0252318087), or call the JRF for further information at +962 6 593 3211.