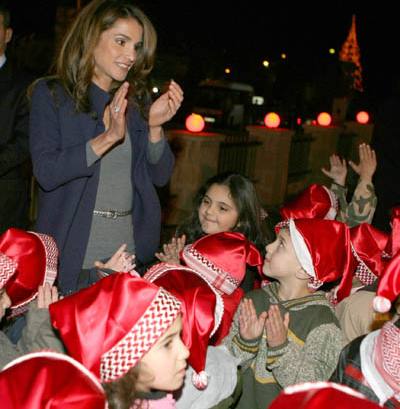 FUHEIS - Her Majesty Queen Rania on Monday lit the Kingdom’s largest Christmas tree in the centre of Fuheis, marking the official opening of the Fuheis Christmas Festival which will run through December.

Glittering with holiday lights and Christmas decorations, the city’s main square was full of holiday cheer as citizens gathered to watch the ceremony, with nearly one dozen children singing carols in the background as the Queen flipped the switch.

The Queen was surrounded by more than 50 children, Muslim scholars and religious leaders representing different Christian congregations who gathered around the 20-metre tree.

Hundreds of Christians and Muslims, who took to the streets blocking the circle and nearby roads, started applauding as fireworks went off after the lighting.

Among them was 50-year-old Elias Shaini, who said: "Celebrating Christmas in Fuheis makes life in the town colourful."

For five-year old Zaidoun Hijazin, who was along the 50 children, said yesterday was a "special day".

"My teachers told me that Santa Claus is coming today with lots of gifts. I am happy that I will see him, " Hijazin said before the Queen’s arrival at the ceremony.

Also yesterday, Queen Rania met with over 200 orphans as well as local schoolchildren taking part in entertainment activities such as face painting.

She then paid a visit to the Orthodox Secondary School where community members were selling Christmas decorations and food. The Queen said she enjoyed spending time with the children and hopes the spirit of the holidays continues to spread throughout the Kingdom, bringing together Muslims and Christians who are all celebrating holy occasions - from Eid Al Adha to Christmas - during this special time of year.